A poll from YouGov published today based on constituency by constituency estimates suggests that there could be a hung Parliament.

It should be noted that YouGov themselves make the caveat that 'it would only take a slight fall in Labour share and a slight increase in the Conservatives' to result in Mrs. May returning to No.10 with a healthy majority.'

It is also stated that 'The model is based on the fact that people with similar characteristics tend to vote similarly - but not identically - regardless of where they live.' This strikes me as a big assumption given that these characteristics are a less good guide to voting behaviour than in the past. It is also admitted that the model 'does not account for specific local factors that may shape the vote in some seats.' This strikes me as important in this election, e.g., popular Labour incumbents.

All the polls face the problem of estimating turnout. For example, 18-24 year olds overwhelmingly back Labour, but will they turn out and vote?

It is well worth looking at the latest report from the Polling Observatory, although they point out that current forecasts could mean anything between a Conservative landslide and the Tories scraping home. One point they make is that Labour may pile up votes in its safe seats, while losing ground in marginal: Polling Observatory

Emphasis on the local

I now have the election address of Chris White, seeking re-election as Conservative MP for Warwick and Leamington. The main emphasis is on what he has achieved locally, which is reasonable enough given that he has been an energetic and conscientious MP. He pledges, 'I remain as determined as I was when I was first elected to address local issues, building on the experience I have gained.'

There is a certain amount about his select committee work and other issues he has pursued in Parliament. Referring to his service on the International Development Select Committee, he states that he is a 'strong advocate for 0.7% of GNI protected for aid funding', not something that every candidate would emphasise.

Theresa May is only mentioned in relation to the fact that he served as her PPS when she was in the Home Office. 'Conservatives' appears in small print, certainly smaller than the various references to 'Chris White'.

What is completely absent is any reference to Brexit. Chris White was a remainer, but then had to follow the party line. However, we are left with no idea how he would react to a hard Brexit and what he thinks about 'no deal is better than a bad deal.'

One hint of dissent is that 'I understand concerns about school funding and will be campaigning for more support.'

Male only choice in Warwick & Leamington

As in the 2015 general election, I will be following the local constituency battle in Warwick & Leamington. This could be the last contest in Sir Anthony Eden's old seat, as proposed boundary changes would put the two towns which are contiguous into different constituencies, much to the annoyance of locals. (Warwickshire is to lose one seat).

The seat was held by Labour from 1997 to 2010. At the last election the Conservatives received 47.9 per cent of the vote, up 5.1 per cent. Labour held almost steady at 34.9 per cent and the Liberal Democrat vote collapsed to 5 per cent with UKIP picking up a little over 8 per cent.

Jeremy Corbyn visited the constituency during the week and a Labour tweet referred to it as 'Royal Leamington Spa'. He attracted a crowd of around 500, but many of them were students.

Retiring Conservative MP Chris White is standing again. In one of the few West Midlands constituencies to vote for 'Remain' in the referendum, he was a remainer. He is regarded as an energetic local MP.

Mick Western, a recently re-elected county councillor in Leamington, is the Labour candidate. Jonathan Chilvers, who holds a county council side on the south side of Leamington, is the Green candidate. Nick Soloman, a relative political novice, is standing for the Liberal Democrats. Former Warwick mayor Bob Dhillon is standing for UKIP to give Brexiteers an alternative to Chris White.

Voters will thus have to choose from an all male list.

Leading elections expert takes a close look at the SNP's performance in the local elections and says that it looks less secure when you examine it closely: Starts to crack when you look closely 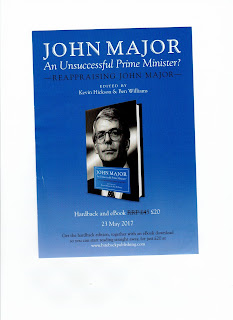 Yesterday I attended a book launch at Liverpool University's impressive London premises for a book on the Major premiership to which I contributed. Contributors were invited to make presentations.

A view that emerged was that John Major was more successful than he appeared at the time, also a theme in the book. For example, he did much of the heavy lifting on Northern Ireland, although Tony Blair took much of the credit.

Professor Lord Norton pointed out that he was actually the third longest serving continuous prime minister of the last hundred years (the 2017 date excludes Asquith).

One view was that it takes a good jockey to ride a difficult horse, but perhaps there had been too much emphasis on the horse in terms of the political context at the time.

Major was first elected in 1979 and hence never served in opposition. He had no opportunity to prepare to be prime minister and to think through what he wanted to do. He fell into the pragmatic category of Conservative prime ministers. His lack of principle and philosophy was to some extent his undoing. However, he did have deep Conservative instincts as well as being pragmatic.

One speaker drew a comparison with Theresa May, asking what does she believe in? The electorate seem to compare her with Mrs Thatcher.

He has been one of the most successful post Prime Ministers, making rare and judicious interventions with good timing. Of course, in a way that is faint praise. It is rather like saying Jimmy Carter was a better post president than he was president.

His long autobiography was one of the best written by a prime minister since Churchill and was characterised by his dry wit.

The book concludes, 'In history, Major is not a towering figure like Attlee or Thatcher, but nor is he a failure like Balfour or Eden, nor a footnote in the party's evolution like Bonar Law or Douglas Hume.'

Millwall fans are planning to nominate a candidate in one of the Lewisham constituencies in the general election: Protest candidate

They fell out with the local Labour controlled council and mayor after an attempt to use a compulsory purchase order to acquire some of the club's land.

72-year old local resident Willow Winston is to stand in Lewisham East, the leafier part of the borough: Everyone hates us, we don't care