John McDonnell has suggested that Labour could form a minority government if Theresa May's Brexit deal is rejected by the House of Commons, as seems likely. Labour would first have to defeat the Government in a vote of confidence. This would require the support of the Democratic Unionists. That seems unlikely to me, if it meant ushering in even a minority Labour Government. They would be more likely to abstain.

However, let's suppose that Labour did win. The Queen would then send for Mr Corbyn and he would have 14 days to form a minority government. Labour has already held talks with the Scottish Nationalists, although they disagree over freedom of movement. Caroline Lucas would presumably support Labour, as would Plaid Cymru. The Liberal Democrats would certainly demand a second referendum, something that Mr Corbyn does not want. If the Labour Government was defeated on a vote of confidence, there would then be a general election which is what Labour says it wants anyway.

It's an interesting scenario, but an unlikely one. What is possibly being underestimated is the 'Norway for now' option advocated by Nick Boles gaining more traction. 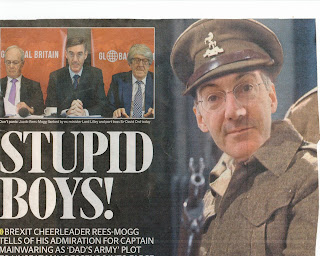 You have to laugh at last night's Evening Standard front page. All the posturing by ERG Brexiteers has ended up with them looking foolish. Tactically the moment to challenge Theresa May would be when she loses (as seems very likely) her Commons vote on her plan. Mind you, her popularity is going up with the public and she is giving some attention to technological solutions to the border issue.

Captain Mainwaring is a rather ambiguous figure: pompous and with poor judgment, but also heroic in a low key way and in that sense an embodiment of the much vaunted 'Dunkirk spirit.'

It is certainly no help when one country is negotiating against 27 and a tactically astute Commission. The idea that a prime minister committed to Brexit could somehow face down the EU is a fallacy in my view.

Nothing will satisfy the DUP

Nothing that Theresa May can offer the DUP will satisfy, reckons Northern Ireland specialist Jon Tonge: Even turning up on bended knee with another billion pounds won't do it

So that leaves three outcomes: trying to get a better deal from Brussels; a general election; or a second referendum. (One might add a fourth: a Brexiteer Conservative PM who goes for a 'Dunkirk spirit' no deal).

The DUP has not really done anything to enhance sympathy for Northern Ireland in England as they appear to be intransigent and backward looking. No doubt they would say they are protecting the interests of their constituents who continue to return them with (in most cases) big majorities. However, more vision might protect their interests better in the longer run.