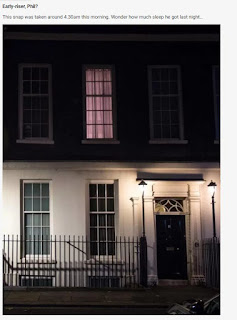 One light was on in No.11 Downing Street in the early hours. Was Phil Hammond putting some finishing touches to his budget?

Phil Hammond is caught between a rock and a hard place, both politically and economically. Politically the Brexiteers in the Cabinet and the party want to get rid of him as the influential remoaner in chief. Whatever kind of budget he produces, it won't call off the hounds.

Economically, he has little room for manoeuvre. He has to produce a Budget that will reboot the Conservative Party but remains fiscally circumspect. With an underlying productivity problem and poor medium-term growth forecasts, that would be a challenge for anyone.

'Spreadsheet' Phil is not the most charismatic politician by a long way. Asked to describe himself with a single word recently he said 'fiscal'. Very commendable, but hardly likely to set the world alight. Despite the usual leaks which means that these days most of the Budget is known in outline before it is delivered, he has been criticised for not personally setting out his stall in the run up to his speech.

Normally the first Budget of a new Parliament would set the narrative for the governing party. An attempt will be made to make housing a central theme as the Conservative Party seeks to claw back the votes of millennials. However, what is likely to be offered is a series of worthy incremental measures rather than a grand strategy that will signal a new direction.

So it looks like a Budget that might be economically sensible, but a political failure whatever it offers.

It argues that the UK’s people, places and businesses will only achieve their potential if there is a complete overhaul of how the government views industrial strategy. The Commission calls for industrial strategy to be rethought as a broad and non-partisan commitment to strategic management of the economy. The new strategy should be a long-term plan with a positive vision for the UK. It should provide Universal Basic Infrastructure for all citizens, have a strong focus on place, and ensure health and education are included.